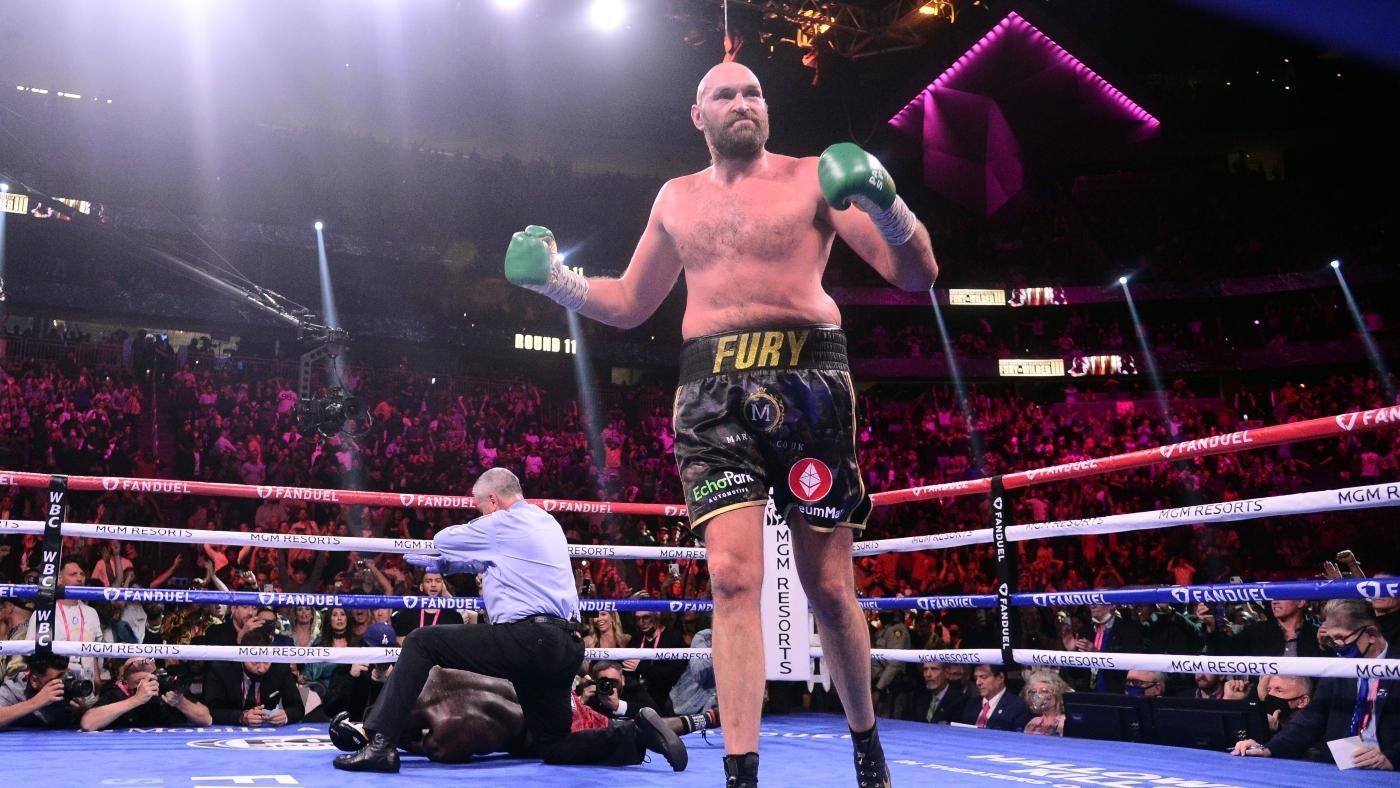 Tyson Fury, who is widely considered the best heavyweight of this generation, defends his WBC title Saturday against veteran former title challenger Derek Chisora in a 12-round boxing main event. Their battle tops the main Fury vs. Chisora fight card (2 p.m. ET) from Tottenham Hotspur Stadium in London. Fury is making the third defense of his belt after he won it from Deontay Wilder and defended it against him in their memorable trilogy. He made another successful defense against journeyman contender Dillian Whyte in April. Chisora is getting his second career shot at a major title and first in more than 10 years. In February 2012, he came up short for the WBC crown against former champion Vitali Klitschko.

Fury is a -2000 favorite (risk $2,000 to win $100), while Chisora is priced at +1000 (risk $100 to win $1,000) in the latest Fury vs. Chisora III odds from Caesars Sportsbook. The over/under for total rounds completed is 6.5, with the Over favored at -135 and the Under priced at +115. Before making any Fury vs. Chisora III picks, make sure you see the boxing predictions and betting advice from SportsLine analyst Peter Kahn.

A three-time Boxing Writers Association of America Cus D’Amato Manager of the Year nominee, Kahn has his finger on the pulse of what’s going on inside and outside the ring. As one of boxing’s most influential managers, Kahn has guided numerous world champions and currently sports a roster of 15 fighters. His company, Fight Game Advisors, manages former undisputed lightweight champion George Kambosos Jr., current female undisputed super middleweight champ Franchón Crews-Dezurn and rising junior middleweight star Xander Zayas.

Kahn is an astounding 36-9 picking fights for SportsLine since boxing returned following the pandemic-induced hiatus, netting a profit of more than $4,000. Anyone who has followed him has already seen massive returns.

Now, with Saturday’s fight in sight, Wise has studied Fury vs. Chisora III from every angle and identified the best value in the boxing odds. You can see his confident prop bet and money-line picks at SportsLine.

Many boxing observers see this as little more than a tune-up fight for Fury, who reportedly will face three-belt champion Oleksandr Usyk for the unified belt sometime in the first quarter of 2023. In the meantime, Fury wanted to stay sharp and not allow his training to go to waste.

Fury (32-0-1, 23 KOs), 34, last defended the title in April against longtime antagonist Dillian Whyte, who came out strong in the first round but faded quickly as Fury imposed his edges in size and strength. Whyte was stopped near the end of the sixth round, and it is widely expected that Fury vs. Chisora III will be even more one-sided. Coincidentally, Whyte has also twice defeated Chisora.

Although Chisora’s recent record shows three losses in his last four outings, his performances in those fights suggested that of a veteran contender who still has something left as opposed to a fading also-ran who took the fights merely to collect a paycheck.

In October 2020 he went to the wire against Oleksandr Usyk, who now holds three major belts and is widely considered the most well-rounded heavyweight on the planet, apart from Fury. Usyk won a unanimous decision, but the scores were 115-113 (seven rounds to five) on two cards, with the other coming in at 117-112.

Chisora’s next two fights came against Joseph Parker, the former WBO champion who started his career with a 24-0 record before losing to Anthony Joshua in March 2018. Chisora (33-12, 23 KOs lost a disputed split decision to Parker in May 2021 and a subsequent rematch in December of that year went to Parker in a close but unanimous decision.

Chisora also looked strong for all 12 rounds in his July fight against Kubrat Pulev, and he pulled out a split-decision victory. Pulev had won nine of his previous 10 fights. See who Kahn is backing right here.

How to make Fury vs. Chisora III picks

Kahn likes the Over 6.5 rounds at a price of -135 in the latest Caesars boxing odds. He’s also made the call on a method-of-victory prop that returns almost 10-1 as well as a strong money-line pick. You can only see those selections at SportsLine.

Who wins Tyson Fury vs. Derek Chisora III? And which prop is a must-back? Visit SportsLine now to see Peter Kahn’s best bets for Saturday, all from the boxing specialist who has netted his followers a profit of more than $4,000, and find out.

ALBURGH, Vt. -- A brawl broke out among spectators at a middle school basketball game in northern Vermont,...
- Advertisement -

How Breanna Stewart’s move impacts the Liberty, Storm and the WNBA

Saudi Arabia was confirmed as host of football's...
Sports

After decades in the doldrums, Newcastle's progress to...