When offices closed, workers bought vans and hit the road. Some don’t want to return. 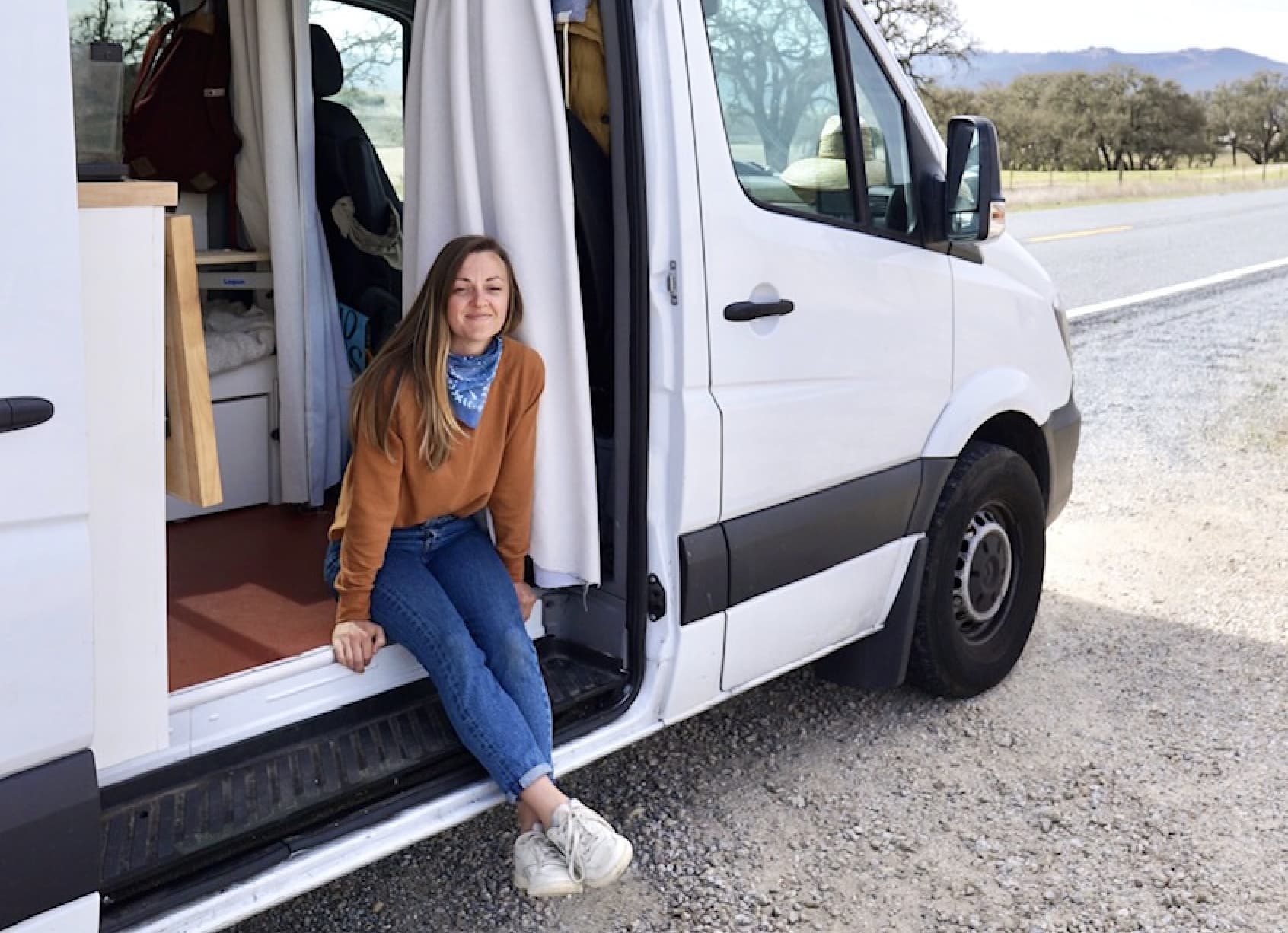 When Erica Horn received a work email in May 2020 saying her company would be fully remote for the next year, she knew right away it was time to live out her long-held dream of living out of a van.

“Nothing else made more sense than van life once that reality became true,” said Horn, who lived in Oakland before moving into her van. “I had no reason, nothing, tying me to that specific location or that amount of rent.”

Horn is not alone. Many workers with jobs that let them work remotely during the pandemic left behind their sedentary housing situations and moved full-time into vans. These remote workers drive from location to location in their homes, working from internet hotspots in their vans and spending their free time in nature and exploring new places.

As vaccines roll out and states start to open up, some workers are returning to their offices. But many workers who’ve adopted the van life don’t want to give it up.

“It’s become a lifestyle,” said Smriti Bhadauria, who lives in her van with her husband Kartik Vasan and their dog Everest. Bhadauria and Vasan have been traveling in their 1977 Dodge B200 Tradesman since leaving Toronto in August 2020.

“We’re extremely happy in this life and the freedom it gives,” Bhadauria said. “There’s no deadline in sight.”

Like overseas backpacking, van life appeals to those with a love for travel or the outdoors who have the privilege to work remotely and the budget to spend thousands of dollars buying and setting up their vans. They can shift the money from rent and car payments toward a lifestyle of endless travel.

“I’ve always been somebody who loves to travel, but I’m definitely a homebody at the same time,” said Cailey Dillon, who works remotely in customer service for Outdoorsy, a van and RV rental company. “I really like that with the van life you can always be traveling but your home is always with you.”

For some, working out of a van is less about travel and more of an alternative to leasing an office.

Kenzo Fong, CEO of tech start-up Rock, began working out of his van in May 2020 after his children began doing their schoolwork at home during the pandemic. Fong still lives in his San Francisco home, but during the days, he gets into his van and picks a new location in the city. Fong spends his day working out of the desk he’s set up in his van, and takes walking breaks to enjoy the variety of locations and gather his thoughts.

Fong prefers this to having an hour-long commute each way from San Francisco to Mountain View, California, as he did for his previous job at Google.

“I just can’t imagine myself doing that again because there’s so much flexibility working from anywhere,” said Fong, whose company builds software for remote workers.

‘Internet is the most important thing’

Buying and setting up a van can be a quick process. But people who really get into it can spend months or years getting set up.

Fong, for example, bought an already-converted van and financed it, and pays a couple hundred dollars each month.

“Way less than getting office space in San Francisco,” he said.

In contrast, Horn spent months working on her van with her dad and a contractor, setting up the van to the specifications that she wanted. By the end of the project, she had spent about $60,000 — $25,000 for a used van and another approximate $35,000 on the build.

Van life vehicles need a few basics: A place to sleep, a desk or table space, kitchen equipment and some sort of bathroom setup.

But perhaps most important is the computer and internet equipment. Some van lifers only need a laptop. Others have more elaborate set ups complete with multiple monitors. But most carry at least two hot spots from different network providers so they can catch signal from at least one of the services as they hit new locations.

“Internet is the most important thing,” said Fong, who has a hotspot for AT&T, Verizon, Sprint and T-Mobile. “I basically have all the major carriers in case I need it.”

These internet requirements sometimes necessitate innovative solutions. Horn recounts finding a great campsite in Sedona, Arizona, but not finding a good signal. So every morning she drove 30 minutes to a nearby town and parked in front of a Staples store where she could finally get a strong connection.

“It’s not always glamorous,” Horn said with a laugh.

Working a nine-to-five job can also be a nuisance for van life workers. For full-timers like Horn, a typical work schedule means they might be parked somewhere gorgeous without being able to enjoy it until the weekend.

This is why many in the van lifestyle are freelance workers, said Jess Shisler, the founder of Sekr, an app that helps people who live in vans find campsites or wi-fi locations.

“A nine-to-five is hard but doable,” said Shisler, who also lives in a van. “The type of remote careers that allow you more flexibility of your schedule are easier to do in this lifestyle.”

Bhadauria and Vasan, for example, do project-based work.

Vasan works in information technology while Bhadauria has a digital marketing job. The two spend the early hours of their days outdoors and then get straight to work. In the afternoon, they’ll take a break from work and explore their area or drive to their next location. No matter what, they prioritize catching the sunset every evening. Ironically, much of their actual work gets done on Saturday and Sunday.

“We almost never do activities on the weekends because it’s usually crowded, so weekends end up being work days for us,” Vasan said.

There’s also a lot of work that goes into living out of a van.

Dillon said she was surprised at how dirty her van gets. She spent the first four months of 2021 living on the road, and she is now home in Platte City, Missouri, working and preparing to purchase an upgraded van so she can return to her travels sometime this summer. While living in her van, she would clean and clean, but the van would get dirty again as soon as the wind blew. Eventually, Dillon said, you just learn to live a little bit dirtier.

Another big challenge is dealing with the loneliness that comes with living on the road. Dillon said she felt very lonely during her first three weeks on the road, and it wasn’t until she got her dog Koda that she began to overcome that.

“I like to be a loner, but it does sometimes get a little too lonely,” she said. “Getting my dog really helped a lot with that loneliness.”

Horn said she spends parts of her days doing van chores, such as cleaning and making her bed each day. She also has to empty the van’s grey water tank and portable toilet and refill her fresh water and propane.

“Most of the moments are not those epic sleeping in the most amazing place and waking up to the most amazing view, it’s very little of that in the grand majority, especially if you’re working,” Horn said. “However, those moments make it worth it.”

Bhadauria, who travels with her husband and dog, says she doesn’t get lonely, but there are times when she misses the friends that come with living in one location. For example, Bhadauria said, she would have wanted to throw a big party for her husband’s 30th birthday, which happened during their time on the road.

“Things like that you miss, when you want a big gathering or a sense of community,” Bhadauria said.

Although she and Vasan love life on the road and plan to continue it for the foreseeable future, they understand the lifestyle is not sustainable indefinitely.

“With everything you get to a point where things start feeling boring or there’s a burn out at some point,” Bhadauria said. “If we get to that stage, we’ll be happy to go back to a home base somewhere.”

Despite the challenges of life on the road, those who spoke with CNBC said they plan to continue their nomadic lifestyle until their companies stop allowing remote work or until they get burnt out. Horn said she originally planned to live on the road for at least a year, but that’s now changed.

“At six months, I still feel like I’m just learning this, just getting the hang of it and just getting started,” she said. “I could actually see myself doing it for closer to two years, and who knows, maybe longer.”

For example, Florida, which last week accounted for more than 20 percent of Covid-19 cases reported in the...

More than 1,500 workers for the video game maker Activision Blizzard walked out from their jobs this week....

With a high population density, reliance on subway systems and plethora of public spaces, many experts predicted the...

For example, Florida, which last week accounted for...