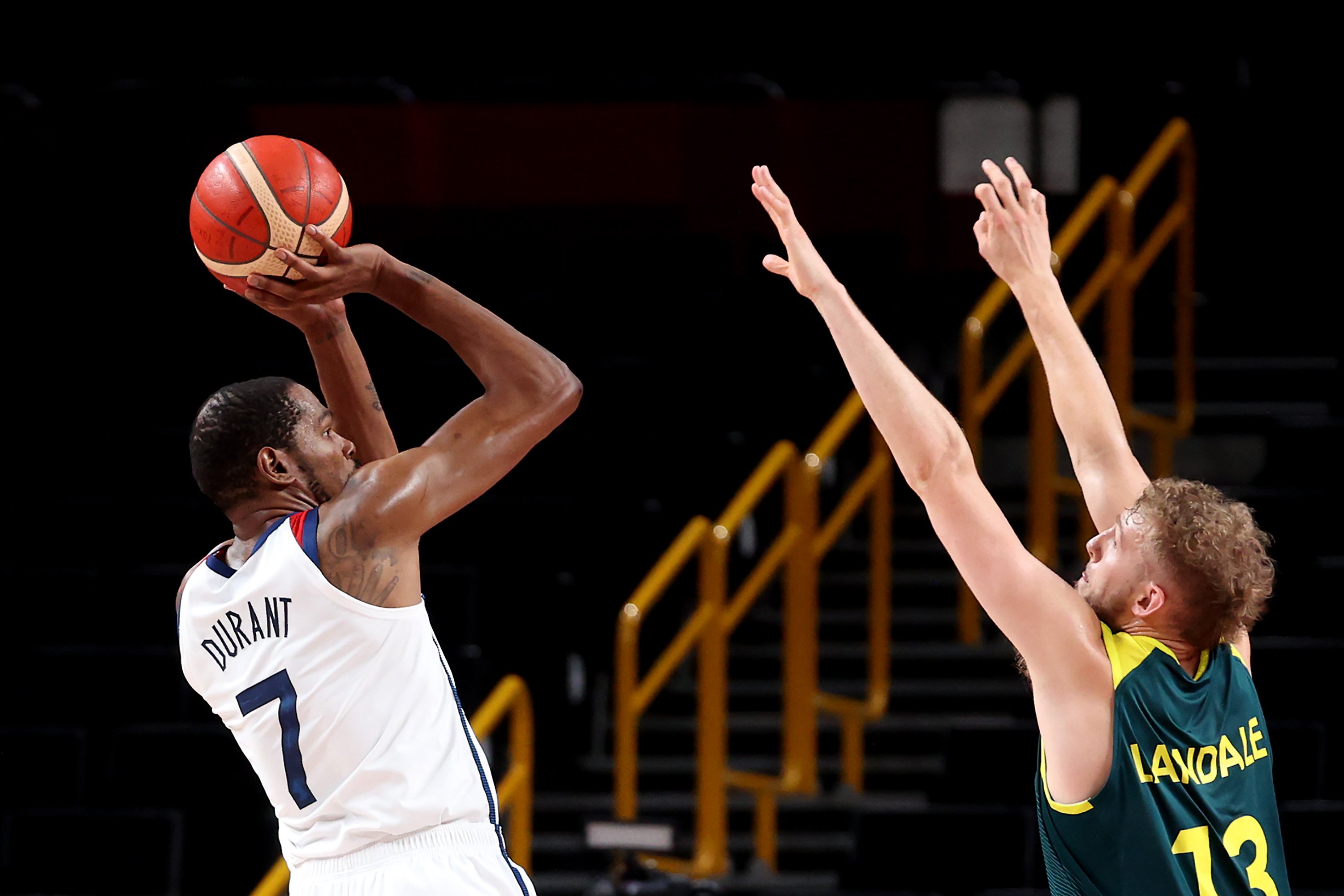 Team USA captain Kevin Durant took control early Thursday and drove the Americans to a 97-78 comeback win over Australia and a berth in the gold medal match.

Durant had 23 points, nine rebounds, and two steals as the United States trailed by as many as 15 during a rough first half in Saitama, Japan.

The U.S. will either meet France, who upset the Americans in group play, or Luka Doncic and Slovenia in the final on Saturday.

It is the team’s fourth consecutive gold medal game at the Olympics.

Devin Booker had 20 points in the win, while Jrue Holiday scored 11 with eight assists and eight rebounds.

Patty Mills led Australia with 15 points, while Dante Exum had 13 and Jock Landale 11.

Australia led 24-18 after one quarter thanks in large part to Joe Ingles’ seven points and two assists.

And the Aussies would grow their lead to 15 by the 5:23 mark of the second quarter, as Dante Exum was exceptional in collecting 10 points and two assists.

The former Utah Jazz teammates were part of a unit shooting 44 percent from 3-point territory.

The U.S. came out of the timeout and got two from Kevin Durant, but the team’s leading scorer soon missed a 3 to underscore their 0-of-9 start from behind the arc.

Jayson Tatum got the Americans within single digits with a contested three and Durant took the deficit down to five with 1:09 left in the half. He’d finish the half with 15 points.

Jrue Holiday hit a lay-up to give him five points to accompany his six assists and close the half with Team USA down 45-42.

The Americans came out of halftime with intent and Holiday put U.S. in front within two minutes of the restart with a dribble from the top of the key to within six feet of the hoop.

The U.S. put together a 28-4 run between the first half and six-minute mark of the second, Durant doing a lot of the work.

The team captain is now first in the USA’s Olympic history for points, free throws, and tied with Carmelo Anthony with 139 three-pointers following a early in the third quarter.

Zach Lavine had a pair of emphatic second-half dunks as the U.S. pulled away with a 32-10 third quarter.